In Love with Handscraped Hickory

To recap, we were able to pick new flooring when it was determined that the water damage and defects in the laminate indicated that the entire foyer/hall/powder room needed to be replaced.  We selected Armstrong Hardscapes Handscraped Hickory in Candy Apple.  Here is the flooring before (Armstrong Illusions Native Cherry laminate): 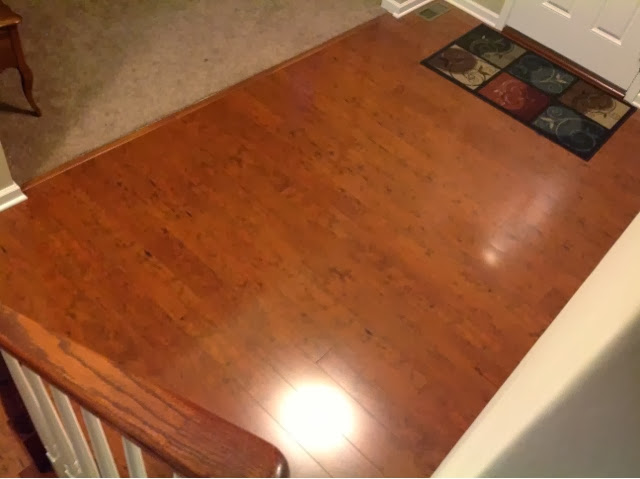 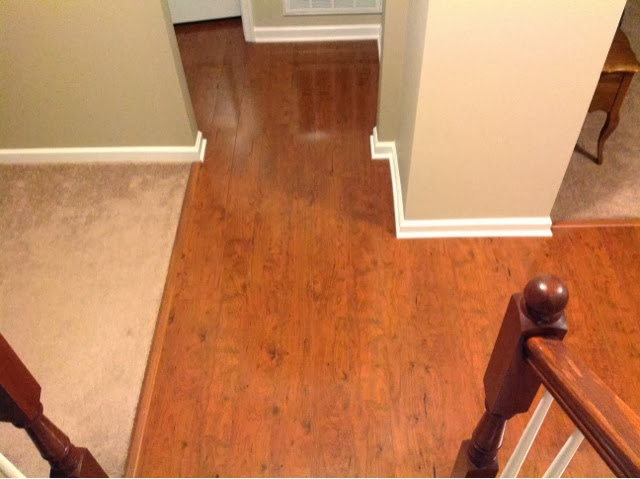 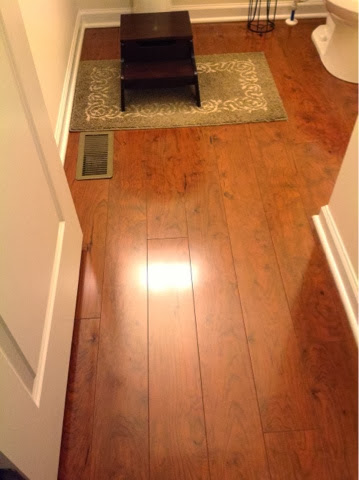 Here is the after: 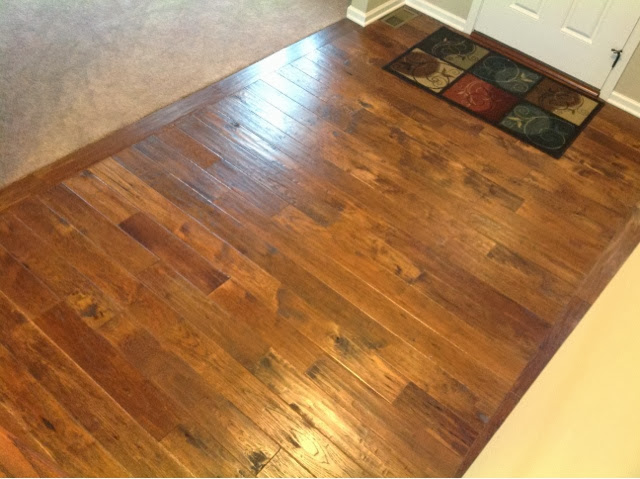 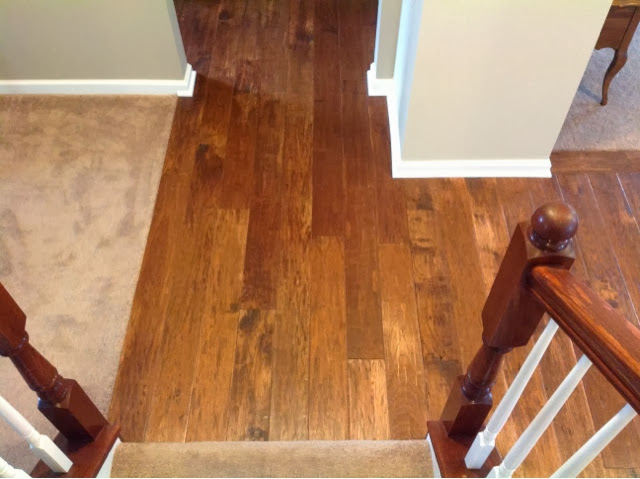 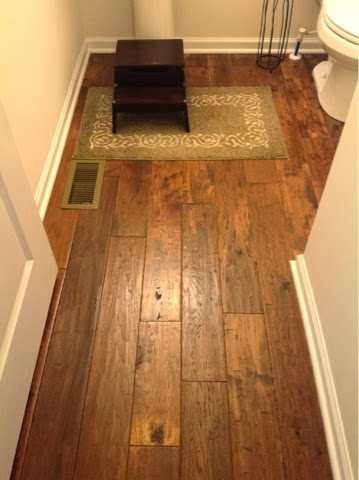 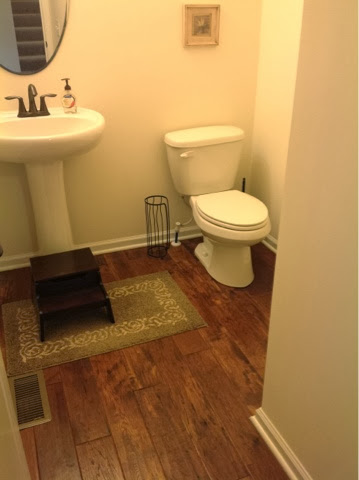 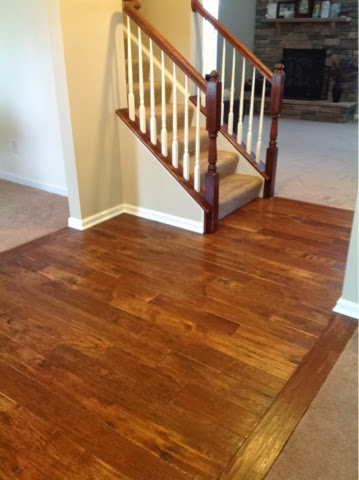 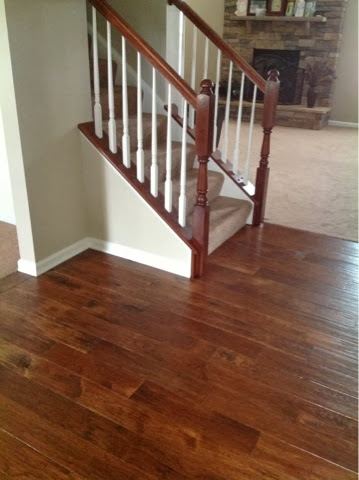 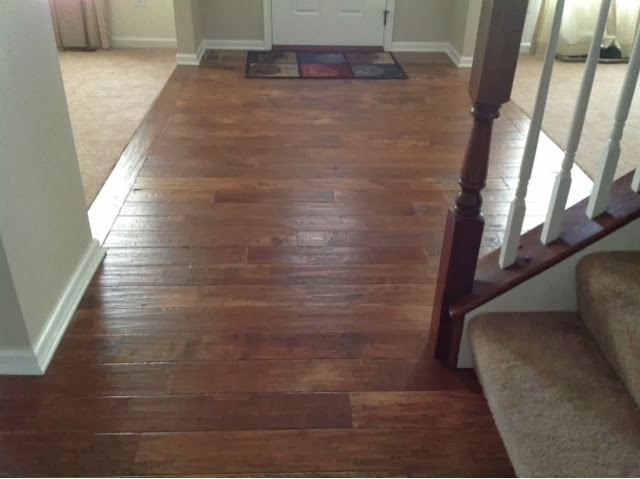 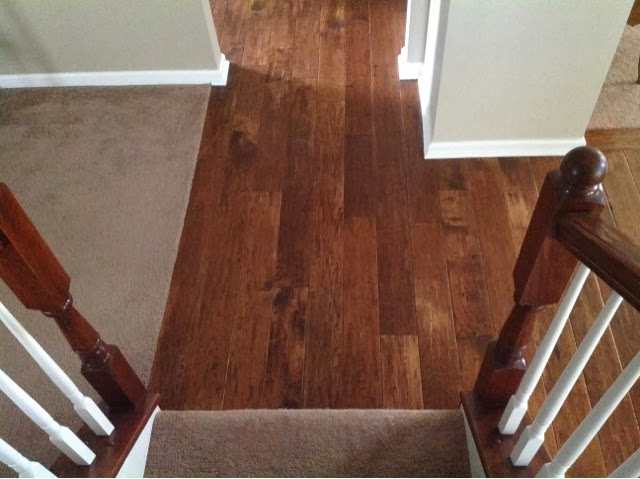 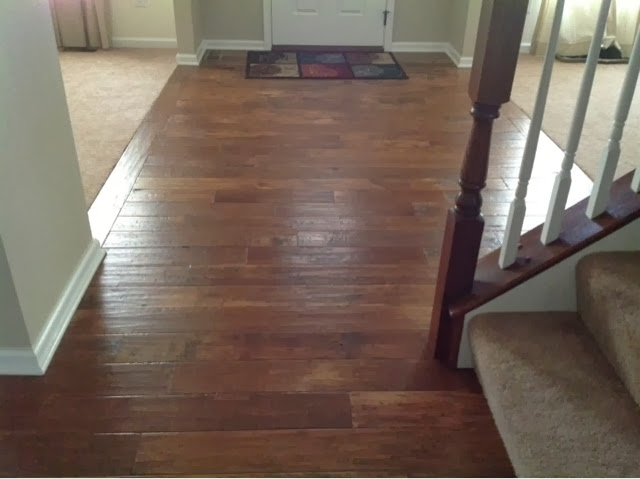 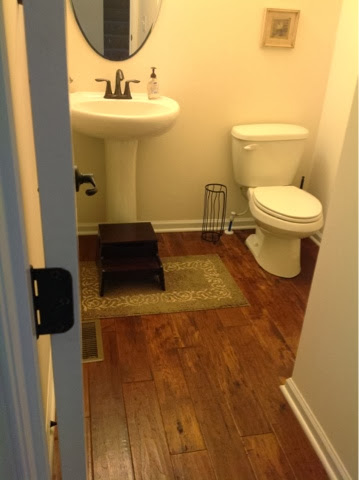 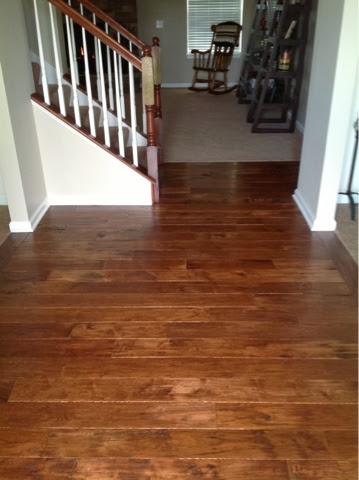 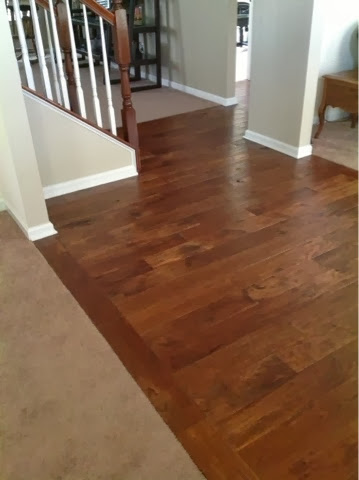 Goodbye, squeaky, shiny laminate.  Hello, beautiful, quiet hardwood!  I could stare at it all day.  It is gorgeous.

Update and Some Good News (for a change)!

A quick update on the water damage: All drywall was repaired and various baseboards were replaced.  It took two visits as they missed some areas the first time.  For those that are considering painted before your 10 month, I don't recommend it at all!  The areas that I had already painted (after my 10 month) only had the drywall repaired.  They didn't even bother to paint with the original wall color so that I at least had one coat of paint on it before adding our custom color.  The patched areas still do not blend with the original drywall.  I have put three coats of paint on.  It's getting better, and I am thankful that it is in the stairwell where it is hidden by shadows, but it is aggravating to have to go through painting the stairwell again.

Onto the good news!  The laminate flooring in our foyer, hallway and powder room has been an issue since we moved in.  The flooring installers have been here about four times (I've lost count) trying to fix issues with loose subfloor along with creaking and squeaking in the flooring.  Supposedly, it is binding up under the baseboard.  They kept trying but were unable to eliminate the noises.  Because of the volume of water that got onto the floor, it was determined that they would need to replace most of the laminate and because of the noise issues, they agreed to replace it all.  Since they were replacing all of it, I asked to select a different flooring.  They agreed!  I have never liked our laminate.  It has such a high shine finish that every little spot shows.  Sweaty footprints always mark up the floor, and unless it's been freshly cleaned, it looks awful.

We went to the showroom to select new flooring, and the flooring rep was great.  Since we were selecting floor "after the fact," we were allowed to pick from the entire showroom, not just the Ryan room.  We were able to bring home a few samples, and we are excited to be getting handscraped hickory solid wood flooring!

Here are a few pictures: 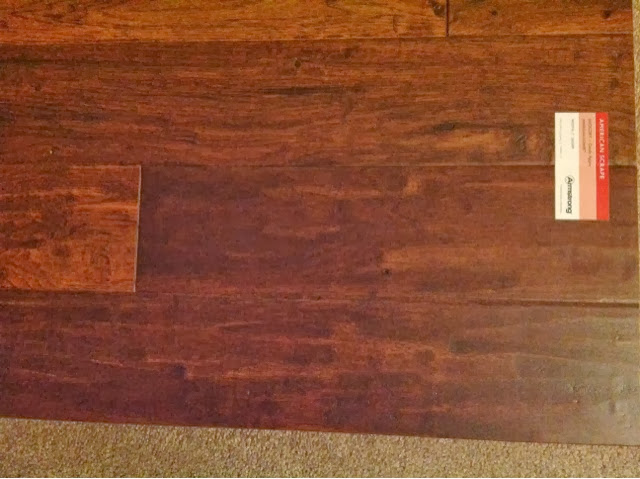 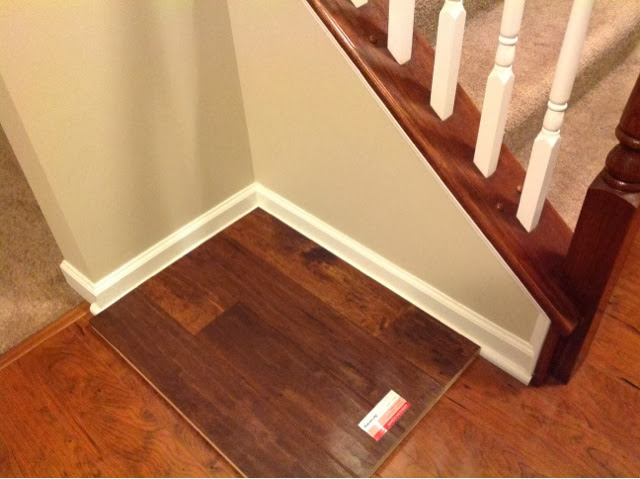 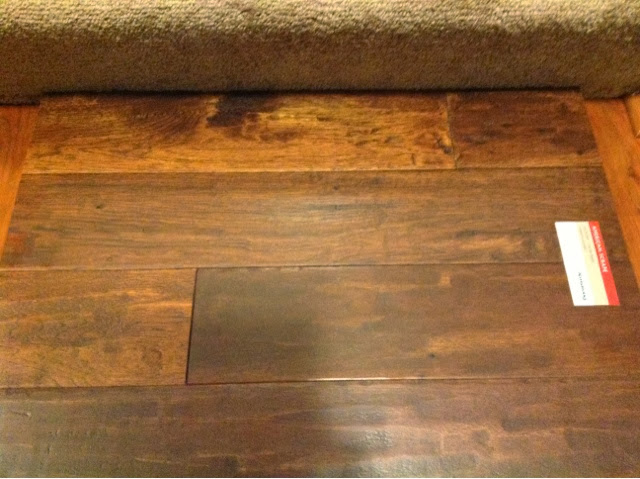 It is gorgeous, and I can't wait for it to be installed tomorrow!  More pics to follow :)
Posted by Rachel at 3:23 PM 7 comments:

Nothing More, Nothing Less

When we first met with our PM at our pre-con meeting, we had a few special requests.  They were all denied.  Our PM told us, "I will build you the house that you contracted.  Nothing more, nothing less." Unfortunately, we received much more than we asked for.  We didn't ask for leaky windows, siding issues, shoddy carpet, crooked walls, crooked trim, doorknobs that fall off, $300+ electric bill because the HVAC installer put the wrong kind of battery in the outside sensor, squeaking and creaking floors, cracks in the drywall, numerous other issues and all the half-hearted repairs that come with them.  The most recent example of their ineptitude occurred a couple of weeks ago.  I am still dealing with the repairs and awaiting the outcome which is why I have hesitated to blog about it.  But, I need an outlet to vent, so here's the scoop:

I was on the first floor when I heard a sound like a firehose hitting the house on the second floor.  First, I ran outside.  Nothing seemed amiss, so I headed for the second floor.  The washing machine was running, so I checked on that first.  The sound wasn't coming from the laundry room, so I followed it to the secondary bath.  The sound was coming from behind the shower enclosure.  I flipped the shower faucet on and there was no water.  At this point, I ran down the steps to find water pouring out of my foyer light.  I headed to the basement and found water running down the pipes and door frame around the storage area.  I turned off the water to the house at the water meter.  About five minutes had elapsed from the time I heard the sound to when I turned off the water.  It was warm water, so I assumed a hot water line had burst.

I called Ryan's emergency line.  I explained the situation to the rep on the phone.  He gave me the plumber's phone number, said he would contact the plumber and the Service Manager and that I would be hearing from them shortly.  When an hour had passed and I didn't hear anything, I called the emergency line again. The rep that I spoke with that time asked me if I had explained that it was an emergency.  Really??? I can't see how anything that I explained did NOT constitute an emergency.  We couldn't use our water.  There was water dripping from several locations.  I could not believe she was implying that it was my fault for not expressly stating it was an emergency.  That's what the emergency line is for!

After she rewrote it as an emergency ticket, I got a call from the service manager.  He came over within 20 minutes to inspect the damage.  As we were walking through the house, the plumber arrived.  (Imagine my panic when I saw it was the same genius who, when reconnecting the master bath faucet during a previous repair, never bothered to turn the water back on and check to see that everything was connected correctly.  This resulted in water dripping through my eyeball lights above my fireplace because he did not re-install the faucet properly).  Anyway, the plumber came in and after telling my story, they tried to determine the location of the leak.  They first thought it might be the hot water connection to the the shower.  They cut a three feet by eight inch hole in my closet only to find that that connection was secure.  They headed to my daughter's bedroom under the assumption that it would be a connection at either the sinks or the toilets.  They ended up cutting five holes in the wall!

The final diagnosis was that the installer didn't cut the lines long enough to wrap around from the shower and pick up the lines from the sinks.  So, he added a coupling.  This would have been sufficient, except that he didn't bother crimping the metal band at the coupling.  There was nothing holding the coupling together.  The plumber was surprised that it didn't come apart the first time the shower was run.  The kids prefer our shower, so that shower does not get a lot of use.

Here are some pictures of the damage. Some pics may need to be clicked on to see the effects of the water. 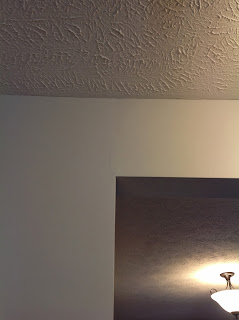 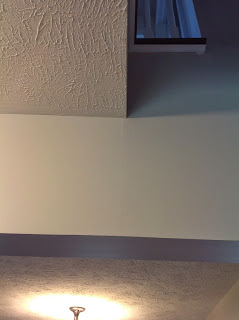 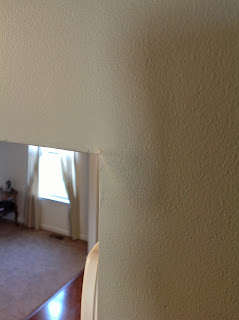 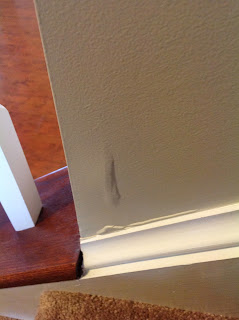 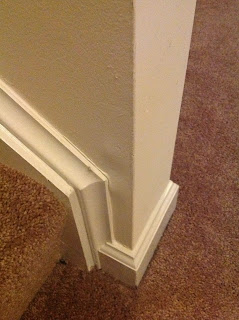 I have sent an email to the service manager regarding the quality of the repairs.  I am awaiting his reply, but if this is not handled to my satisfaction, I am prepared to go over his head.  I have been nothing but patient with all of this, but I am at my wits end. There is also a flooring issue, but this has been way too long already!
Posted by Rachel at 10:21 AM 15 comments:

We sold our old table, chairs and umbrella before we moved as it was a small table with only four chairs. Being that we are family of five, that was a problem. I've been watching for sales since we decided on a deck, and two weeks ago, Sears had a great sale. We got our set for more than 50% off. It was exactly what we were looking for. It's made by LaZBoy and is very comfortable. 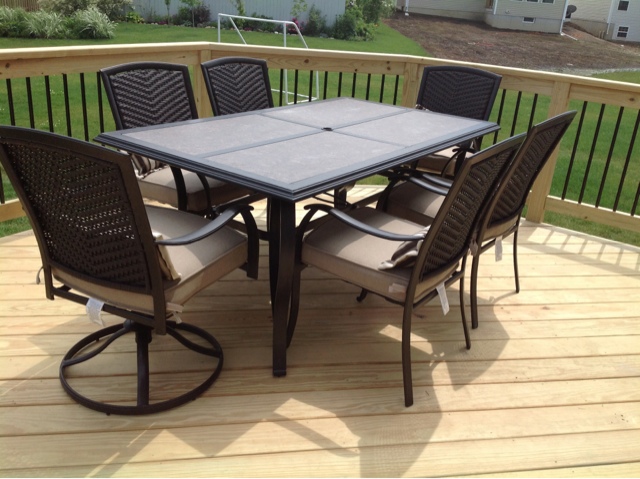 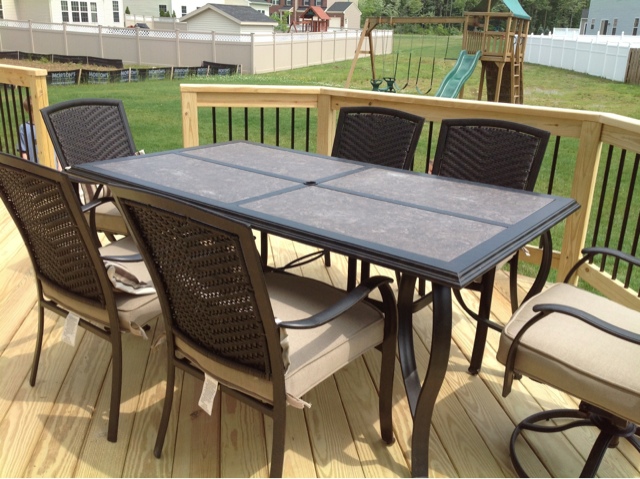 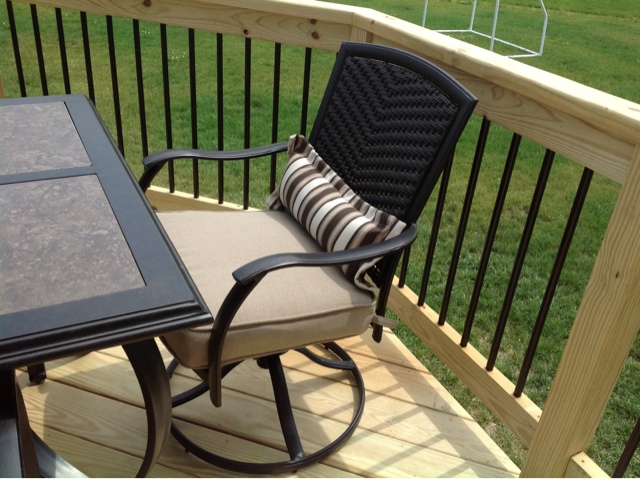 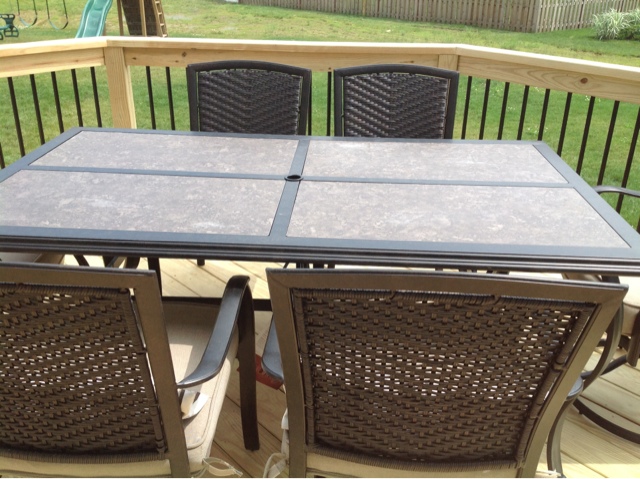 
We spent 8.5 years in our last house debating whether we wanted a deck or a patio.  Needless to say, when we moved out, the construction steps were all that we had! We swore that would not happen in this house.  We were leaning towards a deck all along, but had a few doubts along the way.  We met with around 7 deck builders before making our decision.  This was done back in April.

When we chose our deck builder, he told us that it would probably be mid-June before they would start.  He filed for the permit right away, though, in case he was able to start sooner.  We got a call last Wednesday saying that they would start on Monday.  The weather looked great, so he thought they would be done midday on Thursday.  Well, of course the weather didn't hold, but they have almost finished.  Final cleanup will commence tomorrow.  Without further ado, here is our deck! 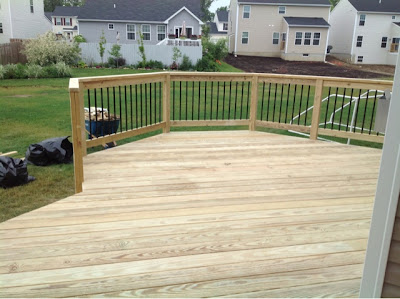 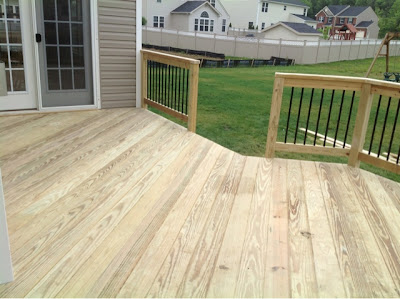